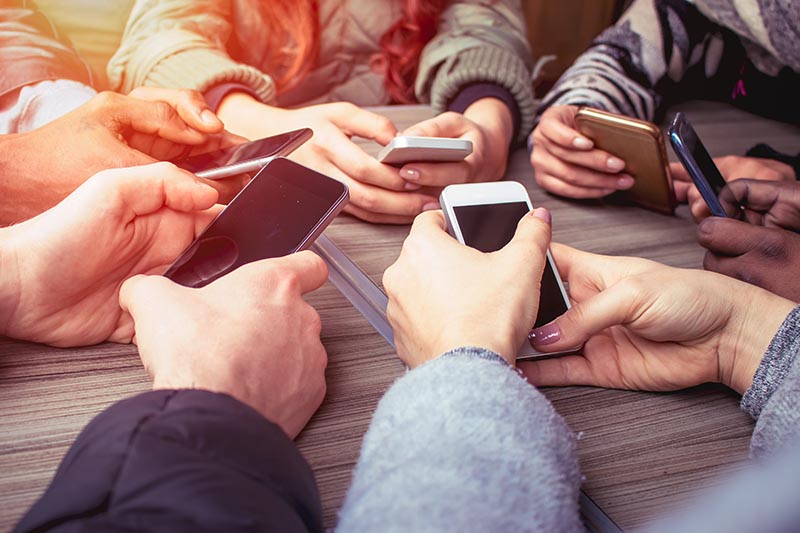 There is a little known addiction that could be impacting your organization in negative ways. It affects people from all walks of life — young and old; rich and poor; men and women. It creates neurochemical imbalances in the brain and has been associated with depression, anxiety, impaired attention, hyperactivity, and lower accuracy rates in numerical processing. There is speculation it may be related to the functional loss of integration and regulation of processing in the cognitive and emotional neural network.

We are talking about digital technology; the internet, smartphones, and other electronic devices. In a first of its kind study, researchers from South Korea were able to show the changes in brain chemistry of smartphone addicts on MRI-type scans. The good news is they also showed these changes could be reversed with cognitive behavioral therapy (CBT). Scientists say the findings may increase our understanding of addictions and best treatments.

Nearly half of Americans surveyed say they “can’t live” without their smartphones nearby. Silly as that may sound there are people who display the same physical characteristics over their electronic devices as we see with opioids, alcohol, or any other addiction.

The American Psychiatric Association defines internet addiction as “an excessive use of the internet that leads to impairment of everyday life, sleep and relationships.”

Researchers out of South Korea wanted to find out more about the issue, especially the immediate and long-term effects. They first identified and looked at the chemical compositions in the brains of 19 male teens diagnosed with internet or smartphone addiction and compared them with a control group of non-addicted male teens.

To determine the degree of addictiveness for each, they used a quiz to see how the use of electronic devices affects daily routines, social life, productivity, sleeping patterns and feelings. Those with the highest scores had the most pronounced addictions.

The researchers then did brain scans of both groups of teens using magnetic resonance spectroscopy (MRS), a type of MRI that measures the brain’s chemical composition. Twelve of the addicted teens subsequently underwent nine weeks of CBT, after which all 19 addicts were scanned again.

The researchers were particularly interested in levels of two neurotransmitters in the brain; gamma aminobutyric acid, or GABA, and glutamate-glutamine, or Glx. GABA slows down brain signals and is involved in vision and motor control and helps regulate various brain functions, such as anxiety. Too much GABA is associated with drowsiness and anxiety. Glx causes neurons to become more electrically excited.

Brain scans of the addicted teens, especially those with the highest scores, clearly showed the ratio of GABA to Glx was significantly higher compared to the non-addicts. There was an overabundance of GABA in a region of the limbic system — the brain’s emotional control center. Disturbing the normal operation of the limbic system can lead to anxiety, depression or addiction. In fact, these addicted teens had much higher scores in depression, anxiety, insomnia severity and impulsivity than those in the control group. Previous research has also shown people who frequently use smartphones have changes in social cognition, impaired attention and reduced right prefrontal cortex excitability.

The lead researcher speculated that the increased GABA among the smartphone addicts could be related to the functional loss of integration and regulation of processing in the cognitive and emotional neural network.

Brain images of the addicted teens following CBT were extremely promising. They showed the GABA to Glx ratios were significantly reduced and even normalized.

The 12 teens who participated had a modified form of CBT designed for gaming addiction. They received weekly 75-minute sessions of mindfulness exercises, which included recognizing their addictive impulses, finding alternative activities and expressing emotions.

We’ve seen such brain changes resulting from CBT many times in our work with injured workers suffering chronic pain and addictions, though we typically see opioid addictions rather than smartphone obsessions.

This study is significant in that it shows the increased GABA levels and disrupted ratio between GABA and Glx among the smartphone addicts, which could help researchers better understand and treat all types of addiction.

Ten states require a licensed psychologist to diagnose the injured worker for compensable mental injuries. Payers in the other 41 jurisdictions would be wise to do likewise, as these experts are among the few that can truly determine the validity of an injured worker’s mental health claim.

Here’s an additional caveat that can muddy the waters in evaluating mental health claims; some states require the use of the American Psychiatric Association’s Diagnostic and Statistical Manual of Mental Disorders in diagnosing mental injuries.

In states where mental/mental injuries can be covered, most exclude stress arising out of personnel actions. Imagine trying to understand whether Fred’s anxiety is due to the gun fight he witnessed in his employer’s parking lot or the demotion he was given for poor customer service scores.

In addition to the requirement that a mental/mental injury be ‘the predominate’ or ‘substantial contributing’ cause to be compensable, some states also say the degree of mental stress must be considered ‘extraordinary.’ There could be a fine line between ‘ordinary’ and ‘extraordinary,’ especially for the lay person.

One more example to underscore the complexity of the various rules and regulations of mental health claims: Colorado is among the states that allow compensation for mental/mental injuries. To be compensable, ‘competent evidence’ is the degree of evidence required. As NCCI explains it: “accident,” “injury,” and “occupational disease” shall not be construed to include disability or death caused by or resulting from mental or emotional stress unless it is shown by competent evidence that such mental or emotional stress is proximately caused solely by hazards to which the worker would not have been equally exposed outside the employment.

Addiction to electronic devices may seem much less devastating than dependence on something such as opioids. But as this study shows, any sort of addiction can change a person’s brain chemistry. This small study adds to the growing body of research showing the effectiveness of CBT in treating addictions.

Ascellus – Integrated Medical Case Solutions – is the premier behavioral medicine network for pain and trauma response with evidence-based outcomes and a proven track record for transforming workers’ compensation cases. Ascellus makes intervention efficient with a national network of 1,5000+ psychologists and psychiatrists in all 50 states.