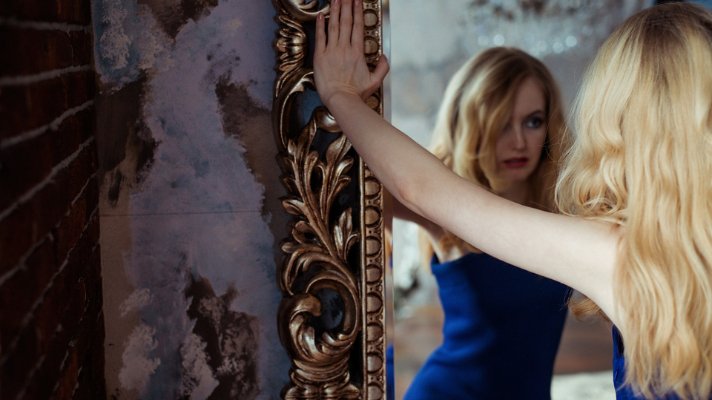 Woman goes to the ER with a bad itch on her scalp. The itch is there while she’s awake and asleep. It’s so bad that she has scratched right through to her skull and has lost everyone in her life. None of the many physicians she’s seen over the past 3 years — including psychiatrists —can figure out what’s causing it or how to stop it.

In our ER, a neurosurgeon offers to remove the nerve endings in her skull to stop the itch. But wait! The resident shrink has other ideas. He believes there’s a psychological component at work and that he can use a technique to help her rewire her brain to stop the itch. Despite her disbelief she agrees to let him try for a few minutes — before she undergoes the surgery. The doctor brings a mirror-type contraption into her room, has her look at it and scratch the other side of her head. She tells him it’s ridiculous and isn’t working, but he asks her to continue. After a few minutes, sure enough, the itch starts subsiding. She doesn’t have the surgery and is healed.

Not only was this a subplot on a major network television show, but it is also based in science. And it’s one of the techniques we use successfully with injured workers who have had unexplained chronic pain for eons. It works.

The Bane of Pain…

Our brains don’t always do what seems logical to us. Sometimes the brain defies reality and takes over in ways that make no sense — unless we understand how and why it works the way it does.

Pain, or in the case of the TV show patient, severe itching, is much more than a physical stimulus. It’s an experience based on our thoughts, emotions and environmental stimuli. That’s why it is also very subjective. The pain we may experience in one area of our bodies often increases and decreases throughout the day, depending on what else is going on. If the brain is distracted for a time, for example, the pain may seem less than at other times when we are dwelling on it—like right before sleep.

Our brains have different sections, including the thinking, emotional and action areas. A physical stimulus sends a signal to the brain, which goes through a complex process of thoughts and memories to determine how to react. If the brain perceives the stimulus as a threat, it sets in motion the fight/flight/freeze reaction, which is part of the emotional brain. It’s a highly effective way of keeping us safe from potential bodily harm. If you touch a stove without realizing is it on, the brain gets the pain signal, figures out it is a threat, and sends a signal back down the spinal cord to your hand to immediately remove it from the stove.

The injured worker with chronic pain usually feels out of control and frightened because he cannot control what his brain is doing. His body is reacting on primal instinct rather than rational thought. The bane of his pain is in his brain.

Fortunately, research has taught us that we can get the brain back to working properly. Like the woman on the TV show, injured workers with unexplained chronic pain can be helped and return to function and can manage their lives.

The process involves doing cognitive and behavioral activities to retrain, or trick the brain so the thinking part takes control once again. Cognitive behavioral therapy (CBT) has been proven to be one of the most successful methods to treat people with unexplained pain — or severe itching.

CBT involves setting patient-specific goals agreed upon by the injured worker and the psychologist. Homework is required for the person to practice various skills and techniques that are used to help block the inappropriate pain signals.

One such technique is mirror therapy. The idea is to use mirrors to create an illusion of an affected body part and trick the brain. The affected part of the body is hidden and the mirror is placed in front of the correspondent area of the other side of the body. It works especially well for a leg or an arm, but can work with other parts, such as one side of the head. The artificial visual feedback tricks the brain into believing the affected area of the body is functioning normally.

Putting two mirrors at right angles to each other provides a non-reversed mirror image. So looking at the right half of your face appears on the left and vice versa. But the brain may not realize the image is flipped. By touching and scratching the side of her head that did not itch, the TV patient’s brain thought she was touching the affected side, but realized there was no itch. The technique works in a similar way for injured workers with chronic pain.

In reality, mirror therapy for the treatment of pain or severe itchiness takes more than the 60-minute time span of a TV show. But by practicing this and other CBT techniques daily for several weeks, injured workers can and do see life-changing results.

Ascellus is a national network of Health Providers in Psychology that delivers cognitive behavioral therapy (CBT) for chronic pain, trauma and insomnia across the country for the workers’ compensation industry.